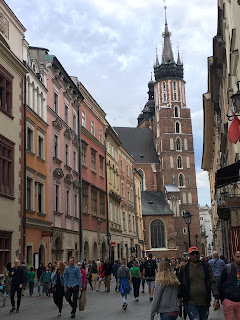 For reasons unbeknown to us we simply couldn't get a Flixbus from Berlin to Krakow at a reasonable time so we flew instead. We booked our flight for 8am thinking that that was early enough and we'd get in to Krakow at about 9:20am giving us the whole day to explore. But, we forgot about check in and actually getting to the airport etc and so we had to splash out and get a taxi to the airport at about 4am in the morning. It was a shock to the system to say the least. I was surprised as well actually at Berlin's Tegel Airport which me and Molly found a nightmare to navigate and was certainly one of the more stressful parts of our trip.
However, we boarded the flight and all was well... Until we reached Krakow which was another rather confusing airport. We couldn't find our way out! We did try using Uber but neither of us had used it before and it was a bit of an experiment- a failed one at that. It took us so long to find our driver that he eventually cancelled on us! After that debacle we finally found the direct train to Krakow city centre and were able to find our apartment and dump our stuff. Overall it was not the most seamless of transfers and I was glad to stop and take a breather.
We decided to book an apartment for Krakow because it was halfway through our trip city-wise and we were staying a bit longer there than we had in either Amsterdam or Berlin (actually because of a mistake booking buses to Prague!). And I was really glad we had. The apartment in Krakow was only about £130 for 3 nights and 4 and a half days which was £20 cheaper than our Berlin hostel! It was quite a plush apartment as well only 10 minutes from the centre of the Old Town- it was wonderful. It was also nice to be able to spread our stuff out a bit and unpack properly without worrying about packing away each night. If you can stretch to it I would recommend staying in an apartment at east occasionally on your travels, it's so comfortable and I think gives you much more freedom- me and Molly cooked ourselves dinner a couple of times as well after a long day of sightseeing and then we spent the evenings watching TV in our PJs.
As for sightseeing I think we really packed it in which was quite easy because everything is quite concentrated within the Old Town. Over the few days we saw:

As well as much more. I think that overall Krakow was probably my favourite place. It was quite small and compact which was a nice relief after Berlin and so beautiful. There was so much to see since it was quite preserved, avoiding much of the damage inflicted on Warsaw in WWII. everyone was quite friendly and helpful and I found it very easy to navigate my way around and using public transport was simple. I think I could easily go back to Krakow and explore more. There's so much to see that really the 4 days we stayed there simply just wasn't enough- especially with all day trips like Auschwitz and the Salt Mine.
I think I would go back to the Jewish Quarter and explore around there without the constraints of a tour guide and make sure that I had fully explore every nook and cranny. Some places we saw a glimpse of on the way to somewhere else that I would've liked to go back to but simply did not have the time! Having said that we did make time for some shopping in Krakow but mainly because the weather there was quite erratic and on a particularly stormy day we headed fr the Cloth Hall markets and shopping centre where we were able to pick up quite a few bargains. I would go back to Krakow for the markets alone! Next time I think I would try and spend 5 days to a week to make sure I had fully seen everything.

Polish food was something quite new to me as well   that I tried a couple of times. In Amsterdam and Berlin we hadn't been able to find any restaurants offering the national cuisine but this was not the case in Krakow which was teeming with traditional restaurants! I tried a wild boar and dumpling stew which was rich and comforting but overall nothing too spectacular or mind blowing. I also tried traditional pretzels which were delicious and for breakfasts me and Molly tried a new pastry pretty much everyday. Mostly filled with a smooth marmalade and covered in sugar crystals. Sticky and delicious! I also tried a rather peculiar delicacy; half a baguette toasted, covered with fried mushrooms then melted cheese with a splash of ketchup to finish. One of the most delicious things I've ever eaten by far.
If someone were to ask me for advice on where to travel for a short break then my immediate answer would be Krakow. I cannot speak more highly of it.

Have any of you guys been? If so what were your favourite parts?